The job of public service offers Representative Chippendale the opportunity to give back to his beloved community, while at the same time being positioned within the RI Legislature to affect positive change on the continual 'squeeze' being put on the average Rhode Islander. Perhaps they are trying to start a new business, grow their existing business or maybe just hoping to continue living in the state they love so much.

Rep Chippendale's interest in serving in the State Legislature was based on the precept that the legislative branch has the most effect on the policies and laws of our state - making it the quickest way to bring positive change to Rhode Island.  Keeping this in mind, it is without hesitation that Mike clearly states that "This office is not a Political Stepping Stone for me to seek higher office - my heart is in the legislature, and my public service will stay with the legislature."

When considering whether or not to support or oppose a bill, there are essentially three questions Rep Chippendale considers before taking a position;

2) What impact will this bill have on the economy of Rhode Island - including the Consumers, Small Businesses, and the Cities and Towns of our state?

3) What has the feedback from District 40 been, and is this a bill/initiative that is supported or opposed by the majority of people I've been in contact with from the district?

As a man who works very hard to impartially discharge his Constitutional duties as a Legislator, Representative Chippendale has consequently earned respect from a great number of individuals whether it be his colleagues from the other side of the aisle, the General Officers of RI and their staff, the 3 towns in District 40, and most importantly, the residents that he so proudly serves. 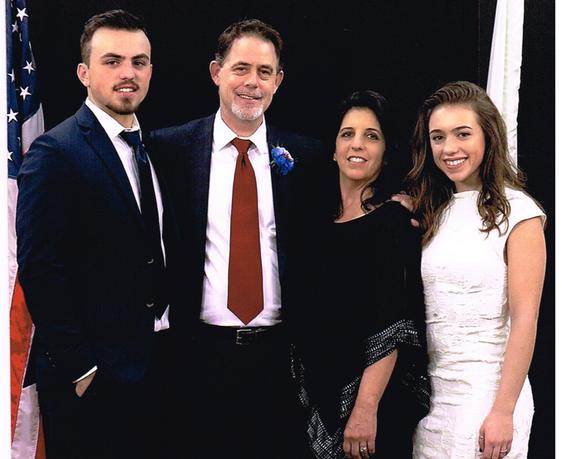 Born in Providence RI in 1969, Mike has lived in Foster with his family for over 20 years. Married to his high school sweetheart Sherri Lombari for 25 years, the couple have a 22 year old daughter Paige, a Registered Nurse, and a 20 year old son Séighín who is a professional heavy-equipment operator.

Mike owned two RI manufacturing businesses for over 15 years and has been a real estate investor since 1992. Small businesses are the backbone of our economy, and Representative Chippendale is intimately familiar with the regulatory and tax burdens that businesses in Rhode Island must deal with simply to survive.

Entrepreneurs and their small enterprises are responsible for almost all the economic growth in the United States.